Osmani Trust is very grateful for the support it receives through the Gold level of the Jack Petchey Foundation Achievement Award scheme.Every year 9 young members are chosen for achieving something special. Sometimes this is for playing well but often it is for something like helping someone else, overcoming an obstacle or trying their best and making progress.

The winners are awarded their certificates and medallions and are able to choose what to spend their award on and make a difference for other young people.

Jack Petchey is one of the UK’s most successful businessmen. Born in East London in July 1925, Jack came from a working class background with very few advantages. From an early age he showed the entrepreneurial skills that have aided his success.

Olida has been attending the girls’ sports sessions for about a year now. When Olida started she was very quiet and kept herself to herself. She would not socialise with the other girls at the sessions and found it hard to play in a team. Olida’s older brother pushed Olida to attend the sessions regularly. Now Olida has developed a lot more confidence. She is always smiling and has made loads of new friends in the session. Her self-esteem has increased and she is able to put herself out there.

Olida has decided to take her friends from the session to go out and eat for a meal. 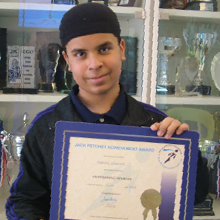 Hakim has been excellent in sporng his two younger brothers ensuring they are both always aending our coaching sessions, This is a great change to his atude as his own commitment wasn’t the best when he only use to take part. Hakim has become very responsible since the beginning of the year he also takes his younger brother to league matches in the weekends.

Hakim has partnered another award winner Nabil to take the whole group on a day of acvies at Stubbers Adventure Centre During the school holidays. 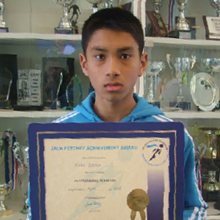 Nabil has been awarded for his good atude and willingness to help others. Nabil has helped new team members to sele in and get involved by always approaching them first and taking to them about all the fun they have in the sessions or about how the match went in the weekend on TV. New members become friends with Nabil very o”en and he always seems to encourage his team mates when things are not going their way.

Nabil has partnered with Hakim (award winner) to take the team to a day of activities at Stubbers Adventure Centre During the school holidays. 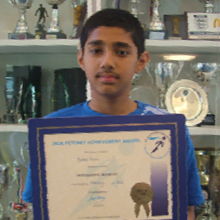